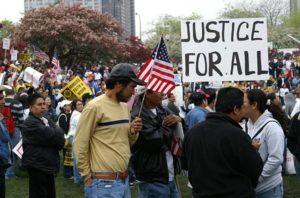 Washington (CNN)Judge Steven Morley has overseen the immigration case of Reynaldo Castro-Tum for years. But last month when Castro-Tum was officially ordered deported, it wasn’t Morley at the bench.
Instead, the Justice Department sent an assistant chief immigration judge from Washington to replace Morley for exactly one hearing: the one that ended Castro-Tum’s bid to stay in the US.

It also highlights the unique structure of the immigration courts, which are entirely run by the Justice Department, and the ways that Attorney General Jeff Sessions — who serves as a one-man Supreme Court in these cases — has sought to test the limits of his authority over them.

The saga of Castro-Tum starts in 2014, when he crossed the border illegally as a 17-year-old. The Guatemalan teen was apprehended by the Border Patrol, which referred him to custody with the Health and Human Services Department as an unaccompanied minor. He was released to his brother-in-law a few months later and registered his brother-in-law’s address with the government. Multiple notices of court hearings were sent to that address, the government said.

But after the fifth time Castro-Tum failed to appear in court, immigration Judge Morley closed the case until the government provided him with evidence that Castro-Tum had ever lived at the address they were sending the notices to. The Board of Immigration Appeals sent the case back to Morley to reconsider with instructions to proceed even if Castro-Tum failed to show again. His current whereabouts are unknown.

Earlier this year, Sessions referred the case to himself and ruled that immigration judges across the board could no longer close immigration cases as they saw fit. The attorney general said immigration judges lack the authority to make such “administrative closures” of cases.