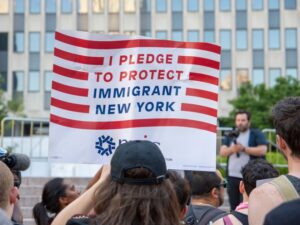 With just over a week to go before the end of the Trump Administration, immigration advocates filed a federal lawsuit in the Washington, D.C. district court against a Department of Justice rule they claim would create “devastating” new barriers to those with cases in immigration court.

The rule, which was announced in December, is set to take effect on Friday. It is being challenged by five immigration advocacy organizations around the country, including Brooklyn Defender Services.

In their complaint, the plaintiffs asked the court to reject a “last-ditch attempt to eviscerate the immigration court system” and the tools they use, as legal service providers, to represent immigrants. They also accused the administration of circumventing “clear legal requirements in the eleventh hour” to achieve goals it couldn’t accomplish through regular means.

They said the rule would make it harder for immigrants to appeal decisions by immigration judges, which are sent to the Board of Immigration Appeals. Both the judges and the BIA are housed within the Justice Department.

If an attorney asks for an extension, the BIA could only grant 14 days more to file their brief; currently it could grant up to 90 days. The plaintiffs said shorter time frames will lead to “summary and erroneous dismissals and deportation orders.”

The BIA also wouldn’t be allowed to consider evidence that immigrants are newly-eligible for asylum and other ways of staying in the U.S., based on a change in fact or law.

Andrea Sáenz, Attorney-in-Charge of the New York Immigrant Family Unity Project at Brooklyn Defender Services, gave the example of a client who has been detained for years and who has a U.S. citizen wife and children. She said a district attorney agreed to vacate his conviction, giving him the ability to apply for permanent residency or Deferred Action for Childhood Arrivals (DACA).

“That kind of motion will not be able to be considered by the agency,” she explained.