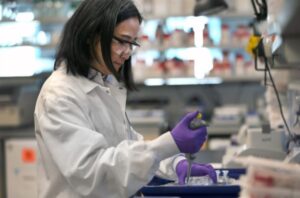 Moderna, the first company to ship a vaccine for testing against the novel coronavirus, was founded by an immigrant. Not only did an immigrant found Moderna but many of its key leadership positions, including its CEO, are immigrants. The story of how Moderna rose to its position in helping to lead the fight against Covid-19 and other medical threats is uniquely American, a story of welcoming talent from all over the world.

Noubar Afeyan, co-founder and chairman of Moderna, is a two-time immigrant. He was born to Armenian parents in Lebanon and immigrated with his family in his early teens to Canada. After attending college, Afeyan came to the United States and earned a Ph.D. in biochemical engineering at the Massachusetts Institute of Technology (MIT). He started his first company at age 24 and ran it for 10 years, during which time he founded or co-founded five additional companies.

In 1999 he founded Flagship Ventures to develop new companies through its in-house division VentureLabs. In addition to investing in startups the idea was to be more systematic in developing companies. VentureLabs conducted its own research and formed new companies if the research proved promising.

The U.S. immigration system has no startup visa for founding a company, which is often is an obstacle for foreign nationals with good ideas. However, Afeyan gained permanent residence through another route and is credited as a founder or co-founder of 38 companies. He also has over 100 patents. In 2009, he co-founded Cambridge, Massachusetts-based Moderna, Inc.

Moderna’s CEO is Stéphane Bancel, who immigrated to America from France. He earned a master of engineering degree from École Centrale Paris (ECP), and came to the United States as an international student, receiving a master of science in chemical engineering from the University of Minnesota and an M.B.A. from Harvard Business School.