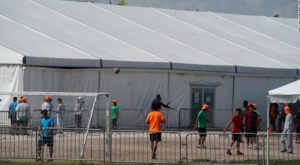 Hundreds of immigrant families in US Immigration and Customs Enforcement custody may have to decide by the end of this week whether they’ll separate from their children or stay in detention together.

The decision facing parents was prompted by a June court order that called for the release of children in federal family detention in light of the coronavirus pandemic. The deadline to let children go is Friday.

“Moms are trying to figure out how their kids are most safe,” said Shay Fluharty from Proyecto Dilley, which provides legal services to families at the Dilley, Texas, detention center. “Is it most safe to go to a stranger? Is it most safe to continue to be in detention as the virus is getting closer and closer?”

Families are detained in three detention facilities run by ICE — Berks in Pennsylvania, South Texas (Dilley) and Karnes County Family Residential Centers in Texas. Children at the facilities range from 1 year old to 17 years old, according to lawyers and advocates who provide legal assistance.

On Monday, a federal judge in Washington, DC, grappled with whether to release families from immigration detention and said a ruling in the case before him would likely not come by Friday, leaving parents to make a decision without knowing if an order might come down the road to release them together.

Here’s where the situation stands:

Why is ICE required to release children from family detention?

In late June, Judge Dolly M. Gee of the US District Court for the Central District of California called for the swift removal of migrant children who are at one of the three family detention centers.

Gee, who oversees implementation of the Flores Agreement which governs care of children in custody, said that given “non-compliance or spotty compliance with masking and social distancing rules,” it was imperative to transfer children out of the facilities.