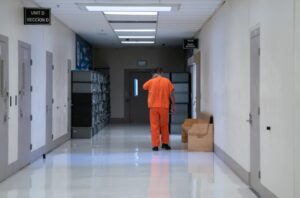 Immigrant detainees in U.S. government custody are getting inadequate medical, dental and mental health care, and they face potential punishment for speaking out, according to a report issued Monday by Democrats on the House Homeland Security Committee.

Citing inspections of eight private and county-run detention facilities overseen by U.S. Immigration and Customs Enforcement (ICE), the report said guards threatened to lock detainees in isolation cells in retaliation for making too many complaints or medical requests. The committee said its staff spoke to 400 detainees.

“The Committee’s review of the conditions at ICE detention facilities confirms that ICE does not do enough to ensure that its own standards of confinement are met,” the report says. “Conditions at ICE facilities also revealed ongoing problems with cleanliness, use of segregation, and access to legal and language services.”

In one instance described in the findings, an ICE detainee in Louisiana went into anaphylactic shock four times in four months before blood tests were administered that determined the man had a peanut allergy. At a jail in New Mexico, where an inspector made an unannounced visit, the facility was “a mess” and 300 sick calls by detainees had gone unanswered, while immigrants with chronic conditions lacked routine care.

ICE said it would take the findings seriously and look into the allegations.

“U.S. Immigration and Customs Enforcement appreciates the efforts of the committee and intends to closely review the report,” ICE spokeswoman Danielle Bennett said in a statement. “ICE welcomes any recommendations that help improve agency processes and ensure that civil detention operations provide a safe and secure environment for detainees.”

“The health, welfare and safety of ICE detainees is one of the agency’s highest priorities,” Bennett added.

ICE officials note the agency has established several layers of monitoring and oversight to ensure compliance with national detention standards.