Home Resources Immigrant advocates to Biden: Be better than Obama 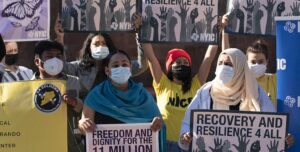 President-elect Joe Biden will begin his administration with one quality that’s automatically a positive for immigrant advocates: He’s not President Donald Trump.

But immigrant advocacy groups aren’t planning to hold back on their demands. They expect Biden to follow through on his promise to quickly undo Trump’s immigration policies — and while he’s at it, atone for the mistakes of the Obama administration.

So far, advocates are encouraged by Biden’s pick to lead the Department of Homeland Security: Alejandro Mayorkas, a Cuban-born lawyer and one of the architects of the Deferred Action for Childhood Arrivals program. Still, they’re gearing up to ensure Biden keeps immigration a top focus amid a long list of competing interests, from coronavirus response to climate change to racial equity.

Biden already has a long to-do list to rebuild the U.S. immigration system. But he could be hamstrung by a divided Congress that’s never managed to pass comprehensive immigration reform.

“Hell yeah, I’m optimistic. I don’t know what the hell we were going to do if Trump won again,” said Marisa Franco, executive director of Mijente, a grassroots Latinx advocacy group. “But then the other side of me is like, ‘I know how this works.’”

“Nothing is going to be enough that [Biden] does and that’s the same issue that folks in the crime-and-justice movement have and folks in policing [reform] have. I think it’s very possible for things to get lost and that’s what our job is: To make sure it doesn’t,” Franco added.

Biden must move quickly to prove he has learned from President Barack Obama’s mistakes on immigration. Obama — despite creating DACA — was dubbed “deporter in chief” and is known for expanding the detention of immigrant families and dragging his feet on major immigration legislation.