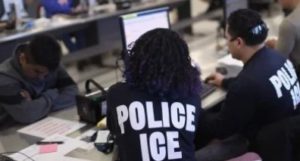 Immigrant advocates sued the Trump administration Tuesday for ending a free hotline that allowed detained immigrants to report concerns about custody conditions after it was featured on the show “Orange Is the New Black.”

The nonprofit group Freedom for Immigrants, which has run the hotline since 2013 with a free phone line provided by U.S. Immigration and Customs Enforcement, sued in federal court in Los Angeles.

The lawsuit alleged that the administration yanked the hotline in August after it was featured on the Netflix show, which drew attention to the group’s criticism of detention conditions for immigrants.

Immigration and Customs Enforcement declined to comment on the lawsuit but said the hotline was removed last year from a list of pro bono legal service providers that immigrants can call for free.

At the time, the agency notified the group that it had been misusing the hotline, said Bryan Cox, an ICE spokesman.

The line was not monitored or recorded so immigrants could find and speak with lawyers, but the group was using it for three-way calling to connect detainees to family, Cox said.

The agency had provided the hotline after a request from the nonprofit and a group of volunteers in Florida who had visited detained immigrants.

Immigrants in detention centers were then allowed to call for free, enabling the group — which also runs visitation programs at facilities across the country — to monitor custody conditions and help reconnect detainees with loved ones separated at the border, the lawsuit said.

It was also helpful for immigrants to remain in contact with hotline operators as the immigrants were transferred across multiple facilities, especially if they didn’t have family or friends nearby, the suit said.