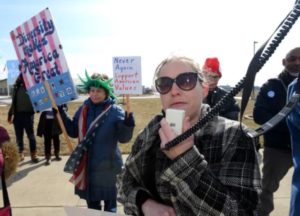 Detroit — Three-dozen protesters rallied Sunday in the city over a report that “elite tactical agents” could head to Detroit over the next three months to enforce immigration laws.

The protest, outside of a U.S. Customs and Border Protection office, was led in part by the Close the Camps Detroit Coalition, according to its page on the Action Network’s website.

“When you send armed paramilitary people into segregated neighborhoods that vote Democratic, bad things are going to happen,” Geralds said.

A Feb. 14 story in the New York Times sparked the protest included information about apparent stepped up enforcement.

“The Trump administration is deploying law enforcement tactical units from the southern border as part of a supercharged arrest operation in sanctuary cities across the country, an escalation in the president’s battle against localities that refuse to participate in immigration enforcement.”

“As we have noted for years, in jurisdictions where we are not allowed to assume custody of aliens from jails, our officers are forced to make at-large arrests of criminal aliens who have been released into communities,” Albence said in a statement.

“This effort requires a significant amount of additional time and resources. When sanctuary cities release these criminals back to the street, it increases the occurrence of preventable crimes, and more importantly, preventable victims.”

While Detroit itself is not considered a sanctuary city, in 2017 Wayne County Sheriff Benny Napoleon sent a memo to his staff, advising that administrative warrants from U.S. Immigration and Customs Enforcement officials “may not be used to detain a subject” — that a warrant from a federal judge or magistrate would be required.