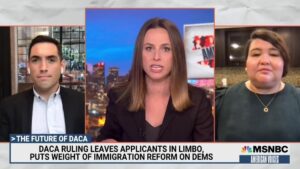 Democrats are nervously awaiting a ruling by the Senate’s referee on whether they can include protections for Dreamers in the $3.5 trillion reconciliation bill.

He believes he’s closer than ever to success.

But it all hinges on an arcane procedural decision in the hands of the Senate parliamentarian, who will rule on whether certain changes to immigration law are eligible for the filibuster-proof budget process that Democrats are using to pass a multitrillion-dollar bill.

“I’m losing sleep over it,” Durbin told NBC News. “It is the best opportunity we’ve had in 20 years.”

Last Friday, Democrats presented their case to the parliamentarian behind closed doors for why this policy complies. It is unclear when the ruling will come, but Democrats are bracing for it as early as this week.

They have set aside more than $100 billion for immigration in the budget resolution. They argue it would have a direct impact on cost and revenue, due to the fees for the costly application process and the taxes the immigrants would pay. They cite precedent on making immigration changes in budget reconciliation, including one from 2005 on recapturing unused green cards.

Democratic staffers came away optimistic that they made a strong case, according to sources familiar with the meeting. But Durbin, an Illinois Democrat and chairman of the Judiciary Committee, has seen near-misses on immigration before.

“I don’t know how she’s going to rule,” Durbin said. The precedents are “part of our argument,” he added. “I don’t know what’s convincing.”

The House has already begun moving its immigration legislation through committee.

Sen. Alex Padilla, D-Calif., said there is nervousness among immigration advocates and “justifiably so.”