Home Resources ‘I’m alone’: These Asylum Seekers Find Themselves on the Street as They Await Immigration Hearings 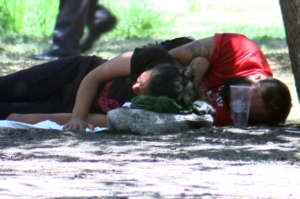 Unlike the families and unaccompanied children who have been the main groups migrating to the U.S. this past decade, Fernández is one of the single adults arriving without family to turn to or contacts willing to help him get on his feet after he was released by U.S. Immigration and Customs Enforcement.

Fernández, who currently awaits scheduled hearings regarding his request for asylum, ended up in San Antonio because that’s where immigration officials decided he should go. A stranger drove him the nearly 200 miles from Laredo, Texas.

“When I arrived, they started asking me at Immigration where I am going. With all sincerity, I said I had no relatives here and that I had nowhere to go,” Fernández, 26, said. “So they gave me an address and told me: Does San Antonio work for you? I told him yes.”

San Antonio, as well as other cities, including Washington, D.C., and New York, are grappling with how to help the growing number of asylum seekers like Fernández.

“I don’t have a dollar to live on,” he said, as one of 15 migrants in similar circumstances who spoke to Noticias Telemundo Investiga.

But Fernández said he trusts “the American dream, which is to work and lift your back.”

Fernández’s first appointment with ICE is on Aug. 25 and his first hearing with the immigration judge will be on March 5, 2024, both in San Antonio. Failing to show up could lead to a decision to deport him without him having his day in court.

Catholic Charities, part of the San Antonio archdiocese, estimates that about half the migrants it serves are single adults with no connections in the U.S. The organization said it has seen more of these arrivals in the past few years.