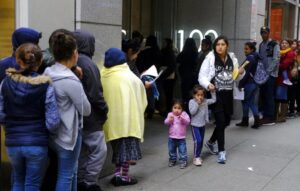 CHICAGO (CN) — A federal judge in Chicago once again blocked enforcement of a Trump administration policy that makes it harder for immigrants to get green cards if they rely on public benefits like food stamps or housing vouchers.

Monday’s decision from U.S. District Judge Gary Feinerman marks the second time the Barack Obama appointee has nixed what is commonly known as the public-charge rule since Cook County, Illinois, first sued the Department of Homeland Security and U.S. Citizenship and Immigration Service along with a local immigrant rights group in September of last year.

Feinerman agreed with Cook County and the Illinois Coalition for Immigrant and Refugee Rights, or ICIRR, and issued a preliminary injunction stopping enforcement of the rule on Oct. 14, 2019, just one day before it was set to take effect.

The judge denied the government a stay pending its appeal of his decision but the U.S. Supreme Court in February overruled, 5-4, and stayed the injunction pending the outcome of the federal government’s appeal.

In June, a three-judge panel of the Chicago-based Seventh Circuit temporarily barred the government from enforcing the rule adopted under the Immigration and Nationality Act of 1965, which would allow the government to deny visas and green cards to immigrants deemed likely to depend on welfare benefits such as food stamps, housing vouchers and Medicaid.

The panel concluded that “Cook County adequately established its right to bring its claim” and that “the district court did not abuse its discretion by granting preliminary injunctive relief.”

Feinerman’s decision on Monday vacates the public-charge rule in its entirety across the country, grants summary judgment to Cook County and allows the ICIRR’s equal protection claim against the government to proceed.