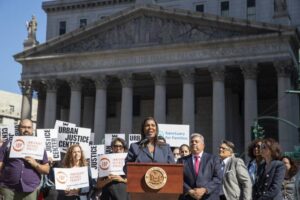 In 2019, a New York prosecutor set to take a burglary case to a grand jury needed the testimony of an undocumented immigrant to secure the indictment. The victim of the alleged burglary wondered: Would being undocumented affect the investigation?

The Queens County prosecutor, Gee Won Cha, assured her that her immigration status would play no role in the prosecution’s case. The prosecutor sought justice on behalf of all people, regardless of whether they were US citizens.

“However, these reassurances failed to put the witness at ease,” Cha wrote in a court filing last year. “Instead, she informed me that she no longer wished to cooperate with the investigation because she was terrified that she would be arrested by ICE if she went to the courthouse to testify before the grand jury in this case.”

For years during the Trump administration, reports of arrests in courthouses across the country were persistent and spurred local leaders, including the chief justice of California’s Supreme Court, to speak out, arguing that arrests by Immigration and Customs Enforcement would dissuade witnesses like Cha’s from appearing at court proceedings.

On Tuesday, the Biden administration will issue a policy that sharply limits the immigrants whom ICE officers can arrest at courthouses after years of criticism of the practice, according to government officials and documents. The policy also applies to US Customs and Border Protection officials as well.

“Ensuring that individuals have access to the courts advances the fair administration of justice, promotes safety for crime victims and helps to guarantee equal protection under the law,” Homeland Security Secretary Alejandro Mayorkas said in a statement to BuzzFeed News. “The expansion of civil immigration arrests at courthouses during the prior administration had a chilling effect on individuals’ willingness to come to court or work cooperatively with law enforcement. Today’s guidance is the latest step in our efforts to focus our civil immigration enforcement resources on threats to homeland security and public safety.”