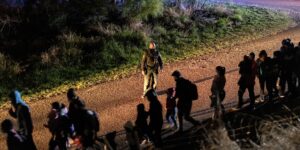 A new report sheds light on how, despite orders from the Biden administration to narrow its immigration enforcement, ICE is still casting a wide net.

ON THE FIRST day of Joe Biden’s presidency, the acting secretary of the Department of Homeland Security issued a memo to change immigration enforcement priorities and limit the number of people U.S. Immigration and Customs Enforcement would target and detain. The same day, Biden issued an executive order declaring a partial moratorium on deportations. Both the new immigration enforcement priorities, which have been sporadically upheld by ICE, and the deportation moratorium, which was swiftly blocked after Texas sued the federal government, have become examples of the new administration’s promises falling short.

Over the administration’s first 100 days, lofty campaign rhetoric and policies in line with a more progressive immigration agenda have met the deflating reality of agencies — both ICE and Customs and Border Protection — that are geared toward the indiscriminate targeting and deportation of noncitizens. Operating in the shadows of U.S. cities, the far reaches of the desert, and often overlooked border stations, ICE and CBP have acted in a manner out of accord with directives handed down by the executive branch.

“Since its inception, ICE has operated with impunity and without proper oversight,” said Christina Fialho, co-founder and executive director of Freedom for Immigrants, which recently released a new report about the administration’s priorities and ICE’s enforcement. “It is deeply concerning but not surprising that, under the Biden administration, ICE continues to flout the administration’s orders and the president has done little to rein in his agency.”

The Freedom for Immigrants report details how ICE has not been following its own policies, leaving people locked in detention centers where they are subject to abuse, miserable conditions, solitary confinement, and paltry protections from an epidemic that has disproportionately ravaged immigrant communities and detention centers.

By John Washington for THE INTERCEPT
Read Full Article HERE