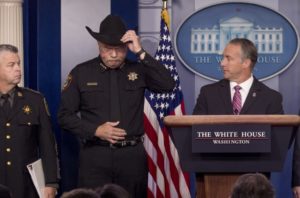 WASHINGTON (AP) — The acting director of U.S. Immigration and Customs Enforcement on Thursday criticized a judge’s ruling barring his agency from relying solely on databases that have at times led to the wrongful detention of American citizens.

Following Albence was a Texas sheriff who suggested the ruling would require releasing jailed immigrants who were “drunks” and would “run over your children,” a comment that was immediately denounced by advocates.

ICE cross-checks jail rosters around the U.S. with federal databases that track people’s nationality and immigration status. When it detects that a person is unauthorized to be in the U.S., ICE will issue a detainer asking the agency to hold the person until he or she can be taken into immigration custody.

Advocates say relying on electronic databases alone to issue detainers is unreliable because they often have erroneous data and can lead to falsely accusing people of being in the U.S. illegally.

Asked about the detention of Americans, Albence said he could not speak about ongoing litigation.

“Many times, individuals that we come across that are United States citizens don’t even know that they are because the laws around citizenship are so complicated,” he said.

President Donald Trump — as well as his top officials and allies — has long assailed judges who have ruled against his administration’s efforts to restrict immigration and ramp up arrests and deportations.