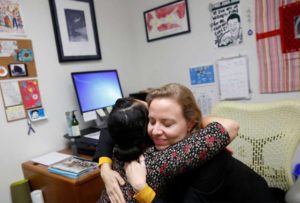 Lawyers representing undocumented immigrants detained by ICE allege that courts and government authorities under the Trump administration are not complying with a federal court order that protects mentally disabled immigrants in California, Arizona and Washington.

The order, established in 2013 after a class-action lawsuit known as Franco-Gonzalez, applies to detained immigrants who suffer from serious mental illnesses or disabilities — such as bipolar disorder and autism — by providing them free access to counsel. U.S. Immigration and Customs Enforcement is required to flag individuals who show symptoms, and those immigrants then go before a judge for a competency hearing to determine if they qualify for protections.

But immigration judges are granting these protections to fewer people, and ICE is referring fewer of them to the courts, attorneys say. That is forcing perhaps hundreds of disabled and mentally ill immigrants to represent themselves in court even though they are unfit to do so, putting them at risk of being deported without due process.

There are no publicly available statistics on the number of immigrants deemed incompetent to represent themselves in court in recent years, and the results of individual cases are often difficult to track, according to several attorneys who handle Franco cases.

Anecdotal records of these alleged violations prompted attorneys for plaintiffs in the Franco-Gonzalez case to file a motion in U.S. District Court in Los Angeles, asking that the Department of Homeland security submit information — including data — on how it’s handling current Franco cases.

A judge granted the motion Jan. 10, saying the evidence attorneys presented is “more than adequate to raise serious questions about potential ongoing noncompliance.”

Attorneys laid out in court documents nearly a dozen cases they say are violations. They include:

• A man who was not given Franco protections until a third-party legal organization stepped in, despite several indications he was suffering from a psychotic disorder. The man, who was not identified, experienced a psychotic break while detained at the Eloy Detention Center in Arizona and reported hearing voices telling him to jump off the roof of the jail’s housing complex.

• An individual who waited seven months for Franco protections despite a reported history of schizophrenia and hallucinations.