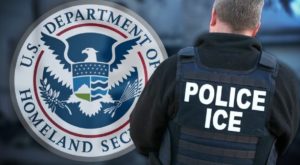 The subpoenas were served to request information on two Mexican citizens they believe are in the country while undocumented and whom they believe have a criminal record, according to a statement released by the agency.

The Washington County Sheriff’s Office responded to the request on Tuesday evening, saying they plan to share the requested information with ICE.

This comes a few days after U.S. Attorney General Barr and the Justice Department ratcheted up legal pressure on local governments over “sanctuary” policies that hinder federal immigration officers.

The Department of Homeland Security issued Washington County Sheriff Pat Garrett two immigration enforcement subpoenas to produce records related to two different individuals in current custody of the Washington County Jail. The subpoenas, at issue, were signed by an authorized U.S. Immigration and Customs Enforcement (ICE) official and were properly served. The subpoenas are specifically authorized by federal law, 8 United States Code section 1225(d) and by the Code of Federal Regulations, 8 CFR 287.4. This administrative subpoena power has existed as part of the federal law for decades, and has beenupheld by the US Supreme Court. See US v. Minker, 76 S Ct 281 (1955).