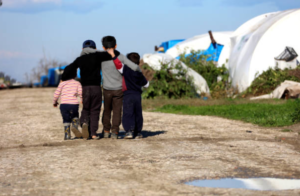 The U.S. government does not have the resources to deport every undocumented immigrant in the United States. America only has so many deportation judges, detention beds, and ICE agents. Thus, federal authorities must set priorities for immigration enforcement. In the final years of the Obama administration, ICE prioritized the removal of undocumented people suspected of involvement in serious crimes; under the Trump administration, the agency is, ostensibly, prioritizing the deportation of immigrants who volunteer to look after migrant children stranded in the U.S. without a guardian. As CNN reports:

On Tuesday, Immigration and Customs Enforcement senior official Matthew Albence testified to Congress that, after Health and Human Services and ICE signed a memorandum of agreement to background-check and fingerprint potential “sponsors” of immigrant children, ICE arrested 41 people who came forward.

In response to an inquiry from CNN, an ICE official confirmed that 70% of those arrests were for straightforward immigration violations – meaning they were arrested because ICE discovered they were here illegally.

When unaccompanied minors cross the U.S. border without documentation — and claim to be seeking asylum from adverse conditions in their home countries — they are entitled to press their asylum claims in court, a process that can take months, if not years, to complete. While migrant children await their day in court, the Department of Health’s Office of Refugee Resettlement (ORR) is responsible for either caring for them in federal detention, or else placing them with a sponsor family in the U.S.

ORR has traditionally regarded the latter as preferable. In most instances, children will fare better with a sponsor family than they will in lockup, and placing them with the former is also less of a burden on federal coffers. To facilitate the placement of migrant children — many of whom have undocumented immigrant relatives in the U.S. — ORR does not consider immigration status when evaluating whether an individual is fit to look after a migrant child, and has typically worked to make undocumented sponsors feel secure in coming forward.