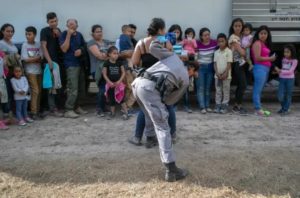 Immigration and Customs Enforcement officials have begun fingerprinting unaccompanied immigrant children over the age of 14 who are not in their custody but are in shelters across the country, BuzzFeed News has learned.

ICE officials called it a way to protect unaccompanied minors in custody.

“In January, U.S. Immigration and Customs Enforcement (ICE) issued field guidance to juvenile coordinators to work with Health and Human Services’ (HHS) Office of Refugee Resettlement (ORR) to identify and collect fingerprints on unaccompanied alien children (UACs) at ORR facilities who are over the age of 14, to mitigate and prevent the risk of their victimization by human traffickers and smugglers, and to reduce misidentification,” a senior ICE official said in an email to BuzzFeed News.

It is unclear if the collection is taking place across the country or in certain locations.

The new ICE directive, issued to its juvenile coordinators in January, appears to be the latest Trump administration policy aimed at collecting more personal information about immigrants — including children — who cross the border. In recent months, the administration launched a pilot project in various parts of the US to collect the DNA samples of individuals at the border.

The Office of Refugee Resettlement oversees shelters across the country that hold unaccompanied children. These shelters then look to identify potential “sponsors” or family members in the US for permanent placement. ORR officials did not respond to a request for a comment.

Democratic Rep. Rosa DeLauro, chair of the House Appropriations Subcommittee on Labor, Health and Human Services, and Education, said in a statement that ICE officials coming into shelter to fingerprint teens is “antithetical” to ORR’s mission, and that she did not buy ICE’s justification “for one second.”

“Make no mistake: ICE’s intention is to intimidate and scare children by entering these shelters, and if HHS allows ICE to do so, they will be complicit,” she said.