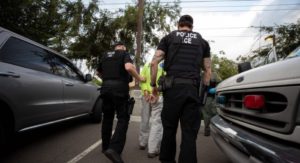 Sanctuary cities expanded in 2019, cutting into Immigration and Customs Enforcement’s potential deportations. But despite that headwind, the agency still managed to reach a five-year high for removals, breaking the previous high-water mark under President Trump.

The number of Cubans kicked out of the country soared, while Guatemalans, Hondurans, and Salvadorans also rose, thanks to better cooperation and a larger supply of targets from this year’s border surge.

Deportations to Mexico fell from 55% of the total to 48%, as ICE made fewer arrests in the interior of the country.

The agency said the reasons are two-fold: Hundreds of officers had to be shifted to the border to deal with the new surge, and the growing wingspan of sanctuary jurisdictions is reducing the number of easy targets — those ICE used to be able to pick up at prisons and jails, but now is blocked from doing so.

Acting ICE Director Matthew T. Albence said the agency deported 13,000 fewer people in fiscal 2019 than the previous year, which he tied to the “decreased cooperation.”

“Sanctuary cities and counties around the country provide safe haven to criminal illegal aliens, harboring dangerous offenders and releasing them back to the streets, where many will re-offend. These are preventable crimes, and more importantly, preventable victims,” he said.

ICE has yet to release its 2019 numbers for declined detainers — unfulfilled requests to local authorities to alert the government to the impending release of a target illegal immigrant and, in some cases, to hold the person for pickup.

But ICE did calculate that in North Carolina alone, state law enforcement refused at least 563 detainers over the course of fiscal 2019, which ran from Oct. 1, 2018, to Sept. 30, 2019. The agency blamed that on expanding sanctuary policies in the state’s biggest jurisdictions.

ICE said Mecklenburg County, home to Charlotte, ended cooperation with ICE under what’s known as a 287(g) agreement, further shielding immigrants who are in the country illegally.

ICE says it missed out on getting eyeballs on as many as 1,000 migrants and had 300 fewer deportations from Mecklenburg alone.