Home Resources ICE Guards Have A “Pattern And Practice” Of Sexually Assaulting Immigrants, A Complaint Says 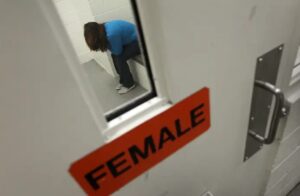 Three immigrants allege Immigration and Customs Enforcement guards carried out a “pattern and practice” of sexual assault and harassment inside a Texas detention center.

The continued sexual harassment and assaults the immigrants allegedly experienced at the hands of ICE officers were detailed in a complaint filed with the El Paso County District Attorney, the US Attorney’s Office for the Western District of Texas, and the Department of Homeland Security’s Office of Inspector General this week. The allegations inside the El Paso Processing Center (EPPC) were first reported by ProPublica.

According to the complaint, ICE guards would take advantage of camera blind spots at the El Paso facility, offer women money in exchange for sexual favors, and warn them against reporting anything, saying no one would believe them. One immigrant man was thrown into solitary confinement after complaining about harassment, the complaint said.

“Mapping out systemic patterns of abuse helps us all see that this is not singular, that in fact there are many more detained women who have become victimized by men in power,” Corchado told BuzzFeed News. “I hope that many more women will speak out. Without them and their stories, how can we dismantle a system that has destroyed their lives? We need them.”

In a statement, ICE said it has zero tolerance for any form of sexual abuse or assault against immigrants in their custody and takes all allegations seriously. The complaint is being investigated by the Office of Professional Responsibility (OPR) and the Office of the Inspector General (OIG).

In the complaint, a woman identified as Jane Doe 1 said an ICE guard took advantage of camera blind spots to forcibly kiss and touch her “intimate parts” in November.