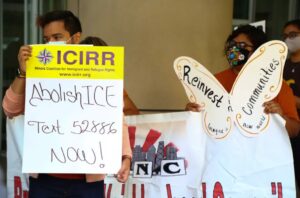 U.S. Immigration and Customs Enforcement has canceled its search for a contractor to build a detention facility near Chicago that would have held people facing deportation, according to a website that tracks federal contracts.

The update was made Tuesday on a website that is part of the U.S. General Services Administration. In a statement, ICE said it canceled its search because it “did not have a viable offer and will not be awarding a contract.”

An ICE official said the lack of detention facility in Illinois could mean that those detained and facing deportation could be moved to facilities farther away.

Chicago-based immigration advocacy groups the Illinois Coalition for Immigrant and Refugee Rights and the National Immigrant Justice Center, released a statement saying the organizations were “elated” by the change.

“Our organizations will continue to fight to hold (the Department of Homeland Security) and ICE accountable, to stop the harms they are inflicting and the fear they are creating in our communities, and to make Illinois welcoming for all,” the statement read.

In 2019, ICE sought bids for a contract that would have brought a detention facility with the capacity to hold up to 1,000 people within a 150-mile radius of Chicago. ICE currently contracts with suburban local jails to detain people facing deportation.

Immigration Centers for America had expressed interest in building a private detention center in Dwight, about 75 miles southwest of Chicago. The efforts were thwarted after Gov. J.B. Pritzker signed a law in June 2019 that expanded the state’s ban on private prisons to include detention facilities.

But in recent weeks, a letter from ICE, dated July 23, that stated an environmental assessment would take place in Dwight caused confusion and worried immigration advocates.

Jared Anderson, the president of the village of Dwight, previously told the Sun-Times that he received the letter but that he didn’t know what it meant.