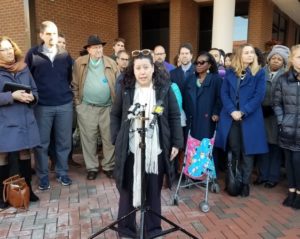 DURHAM U.S. Customs and Immigration Enforcement deported Samuel Oliver-Bruno Thursday evening, almost a week after the agency arrested him when he left the Durham church where he lived to attend an immigration appointment.

The agency deported Oliver-Bruno from the U.S. to Mexico, according to ICE spokesperson Bryan Cox.

“Many among family and friends are traumatized by the violence employed by ICE in this detainment and deportation operation,” said CityWell United Methodist Church Rev. Cleve May in a statement about Oliver-Bruno’s deportation.

“Samuel’s family, church and community supporters are appalled at the flagrant disregard of ICE’s own internal protocols that discourage executing raids in churches and in public assemblies,” the statement continued.

May addressed the definition of “sanctuary” places. ICE generally doesn’t arrest or interview people in “sanctuary” locations, such as churches, schools and hospitals, sites of public religious ceremonies or sites of public demonstrations, based on a self-imposed policy established in 2012.

May called the gathering at the U.S. Citizenship and Immigration Services office a “worship service in prayer” and that Oliver-Bruno never left sanctuary.

“On November 23, 2018 the [public] assembly that gathered to surround and support Samuel was a church service in which prayer, scripture, song and proclamation were centrally present. Moreover, Samuel’s supporters are deeply unsettled by the collusion between USCIS and ICE to utilize a supposedly legitimate immigration process as bait for entrapment and ambush,” the statement continued.

Thursday afternoon, Durham leaders are called for the release of Samuel Oliver-Bruno, who was arrested by immigration officials when he left sanctuary at a Durham church last Friday.

Oliver-Bruno was was held in Georgia until Thursday morning, when he was moved to an undisclosed location. He was deported Thursday evening.

Members of Durham City Council, county commissioners and Board of Education joined faith and community leaders at a news conference Thursday at City Hall in protest of Oliver-Bruno’s arrest and detainment.

“This is a city for all. We will fight and we will defend everyone,” said Durham City Council member Javiera Caballero.

Mayor Steve Schewel said the Durham leaders support Oliver-Bruno and his family and are unified in protest against the actions of Immigration and Customs Enforcement.