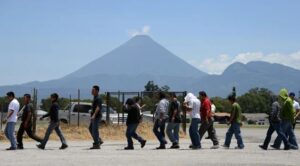 Deportations conducted by Immigration and Customs Enforcement (ICE) fell to a record low in April, as the Biden administration redirects resources from immigration enforcement to border management.

According to a report by The Washington Post, ICE deported 2,962 people in April, the lowest monthly total on record for the agency.

The low April deportations represent a 20 percent decline from the previous month, when 3,716 people were deported by ICE, according to the paper.

The record low numbers come as ICE under President Biden has for the most part limited its deportation activities to foreign nationals with criminal records. Biden’s policy eschews the Trump administration’s expansive interior enforcement.

While Biden and Department of Homeland Security (DHS) Secretary Alejandro Mayorkas have declined a push from the left to fully abolish ICE, they have steered the organization away from the ever-growing detention and deportation operation that grew under former Presidents Trump and Obama.

According to Trac, a nonpartisan immigration data tracker hosted by the Syracuse University, ICE had 15,136 people detained in its system as of April 14.

That number represents an increase over the 13,914 detainees as of March 31, but a majority of ICE detainees since mid-March have been arrested by CBP and turned over to ICE for detention.

Of the 5,612 people booked into ICE detention in April, only 914 detainees were arrested by ICE and the rest by CBP, according to Trac.

The detainee figure also represents a fraction of the 55,654 detainees in ICE facilities in August 2019.