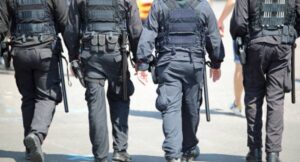 The Trump administration on Wednesday announced that it is cracking down on the abuse of a work training program by immigrants in the country on student visas — arresting more than a dozen immigrants and moving to revoke the work permits of hundreds more.

“The arrests we highlight today are just the beginning and should serve as a warning,” acting Immigration and Customs Enforcement (ICE) Director Tony Pham said at a press conference. “Any non-immigrant student who fails to maintain or violates the terms of their non-immigration status is subject to arrest and removal from the United States.”

Operation OPTical Illusion was launched in January to crack down on the abuse of the Optional Practical Training (OPT) program for immigrants on student visas. That program grants temporary employment directly related to the student’s field, and allows them to work for up to 12 months before and after their studies are finished.

But it has raised concerns about abuse, and ICE says it arrested 15 non-immigrant students who claimed to be employed by companies that don’t exist. “Non-immigrant” refers to immigrants who are on temporary visas, rather than those living permanently in the U.S.

Acting Deputy Homeland Security Secretary Ken Cuccinelli said that U.S. Citizenship and Immigration Services (USCIS) is also sending out about 700 letters to a group of 1100 foreign nationals that ICE identified as in the U.S. “out of status.”

He also suggested that employers, as well as immigrants, had abused the program for cheap labor.