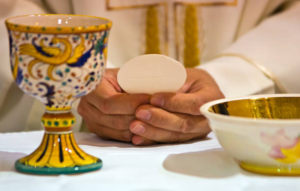 DAYTON — More than a hundred people packed Our Lady of the Immaculate Conception Church tonight to talk about immigration.

The Rev. Satish Joseph, pastor of Immaculate Conception and St. Helen, recounted his recent trip to the Texas-Mexico border. He said he is troubled by what he saw on the trip to El Paso, Texas, and Juarez, Mexico, and on the news this summer.

“How is it that we’ve gotten to the point where the poor and tired are coming to us, and we’ve got this rhetoric that makes them look like criminals,” he said, which undermines America’s core values.

Joseph said he wanted to clear up what he calls common misconceptions about undocumented immigrants who enter the United States.

“These are not people that are coming to Disneyland. They’re actually coming because they’re forced immigrants,” he said.

The gathering comes as lawmakers in Washington debate immigration policy.

Since the early days of his campaign, President Trump has pushed a crackdown on illegal immigration. He spoke about the same issue this week at the United Nations.

And Urbana-based Congressman Jim Jordan on Twitter tonight critized a bill just passed because it “doesn’t fund what we said we would … a border security wall.”

At the church in Dayton, Joseph said there’s one thing he’d ask for above all else.

“No matter what the situation of any person, you cannot take their humanity away,” he said. “You have to treat a person like a human person.”