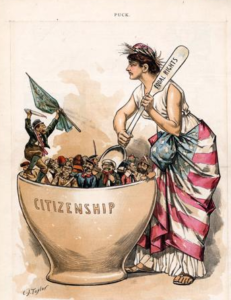 The history of immigration and its social impact in the late 19th and early 20th centuries is the topic of Art & Education at the Hoyt’s newest exhibition.

“Immigration and Caricature: Ethnic Images from the Appel Collection” will be on display from July 5 through Aug. 25.

Utilizing a collection of caricatures published in popular publications dating from the Civil War to World War I, the exhibit explores the role of caricature in forming American values and attitudes during a period of massive migration.

To modern Americans, the contents are sometimes humorous, sometimes disturbing. Yet to the student, these stereotypes offer a remarkable resource for the study of American attitudes and history that still linger in our culture today.

Perhaps the most distinctive feature of a “Nation of Immigrants” is the mixture of culturally different people living together — and not always harmoniously. From roughly 1865-1915, nearly 30 million immigrants came to the United States creating the most ethnically heterogeneous nation in the world.

Not only was this a period of massive immigration but of profound changes in the sources and nature of that immigration. Up to the last decades of the 19th century, American immigration had come primarily from northern Europe including Great Britain, Ireland, Germany, and Scandinavia. However, the disruptive effects of the industrial revolution brought waves of immigrants from Italy and Eastern Europe, followed by the first wave of Chinese in response to California’s Gold Rush.

Earlier, the attitude towards immigration had been predominantly one of Anglo-conformity. That is rapid and complete assimilation to the English-speaking core who had achieved cultural and political hegemony. Toward the end of this period, more progressive thinkers responded with the model of the Melting Pot–that each group of immigrants contributed to the creation of a unique American culture.

The items featured at the Hoyt consist of a variety of print media such as cartoons, postcards, trade cards, and prints and lithographs from the MSU Museum’s collection donated by Dr. John and Selma Appel.