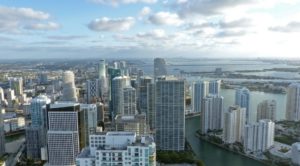 The EB-5 investor visa program, which gives wealthy immigrants a chance to invest in U.S. real estate projects in exchange for a permanent U.S. residency, also known as a green card, will now be more expensive for foreign investors.

The price tag changes? $900,000 from the previous $500,000 for “targeted employment areas” — projects located in government-approved rural areas or locations that have high unemployment, according to a statement from U.S. Citizenship and Immigration Services. The investment requirements for projects located outside those areas will rise from $1 million to $1.8 million “to account for inflation.”

The changes to the program, which has brought in billions of dollars to South Florida in foreign investment over the years, had some investors scrambling to apply before the cost nearly doubled. João Costa from Curitiba, Brazil is one of them.

“When my wife and I saw that they were increasing the amount, we applied,” said Costa, whose investment will go toward a hotel in Orlando near Seaworld. “The $500,000 will pay for 100 jobs through the hotel that I invested in. ”

Now that the changes are final, local developers are worried about how it will affect development as well as immigration.

“For years, EB-5 has provided a cheap source of capital for projects…. Real estate financing is going to undoubtedly become more expensive,” said Scott Bettridge, chair of Cozen O’Connor’s Immigration Practice. “The EB-5 program is especially important to Miami, given the number of wealthy foreign nationals who are looking to reside permanently in South Florida without the need to be sponsored by an employer for a work visa, or a green card.”

Once the federal government approves a development that meets its criteria, developers can recruit foreign investors through the EB-5 program. The foreign investor will lend the minimum threshold amount, receive a pathway to citizenship and, once the project is completed, receive the money back with interest. Every year, the government issues 10,000 EB-5 visas to foreign nationals and their spouses as well as their unmarried children under 21.