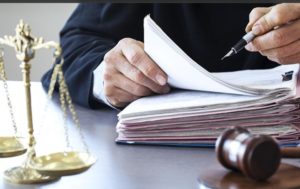 Immigration judges work for a tiny agency within the U.S. Department of Justice. There are just 334 of them to manage a backlog of 733,000 cases nationally. New cases are constantly coming, as demonstrated by the recent surge in migration from Central America that led to the Trump Administration’s “zero tolerance” policy, which included separating children from parents.

In the spring, Attorney General Jeff Sessions announced his plan to impose a controversial quota system to make immigration judges work faster. In order to achieve a satisfactory rating, they’d need to complete 700 cases a year.

It’s not known what the consequences would be for falling short of that. But their union is fighting the plan. “It just is antithetical to the idea that a judge has to make a decision case-by-case as to how much time needs to be spent,” said San Francisco immigration judge Dana Leigh Marks, speaking in her role as president emeritus of the National Association of Immigration judges.

An analysis by WNYC finds judges in New York City, which has the nation’s busiest immigration court, would fail to meet the case completion standard. On average, the New York immigration judges completed just 566 cases a year. But in other courts, such as Houston, judges completed more than 1,400 cases a year. The Justice Department has said that over the last five years, the average judge finished 678 cases in a year.

For our numbers, we looked at case completion rates for each immigration court published by the Executive Office for Immigration Review, which runs the courts. We relied on the agency’s latest annual report from Fiscal Year 2016 (they have yet to issue data for 2017). The agency also told us how many judges were assigned to each immigration court at the end of that year.

To get an average case completion rate for the judges, we divided the number of cases in each court by the number of judges. For example, New York City’s 31 judges completed 17,547 cases in fiscal year 2016, resulting in an average of 566 per judge. (It’s possible not every judge in a particular immigration court was there for the whole year.)