Home Resources How to best support undocumented immigrants in your life 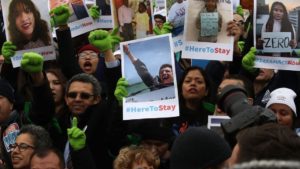 When the Supreme Court goes back in session on Nov. 12, one of the major items on their agenda is determining the fate of the Deferred Action for Childhood Arrivals program, under which 700,000 children of undocumented immigrants, known as “Dreamers,” have been provided protection from deportation.

How did this get to the Supreme Court? The undoing of Obama’s DACA program was one of President Trump’s 2016 campaign trail promises. But after Trump ordered his administration to stop the renewal of work permits for DACA recipients in 2017, his order was blocked by lower federal courts. (Before his blocked 2017 order, Trump also ordered the Department of Homeland Security to stop taking new DACA applications, which they did.) In defense of the blocked order, administration officials claimed that former President Obama’s conception of DACA in 2012 was illegal, due to lack of congressional approval. Justices will soon hear arguments on three cases that have made their way to the Republican-majority Supreme Court.

Given the conservative-majority Supreme Court, the fate of many undocumented individuals is now uncertain, as a ruling that DACA’s creation was unlawful would mean the end of the program — and the erosion of DACA’s protections for recipients. But even as we wait to find out what’s next, we can support those in our communities who need it the most. Mashable turned to immigration experts and advocates for advice on how best to do that.

Carlos Guevara, a senior policy advisor for immigration at UnidosUs, a nonprofit advocacy organization formerly known as National Council of La Raza, cites proper allyship as the first step toward helping others. He also notes that the current conversations we’re having around immigration, including the DACA cases in the Supreme Court, will ultimately touch everyone.

“This is an issue that impacts all Americans,” Guevara said. “We’re talking about an entire generation whose outlooks are at risk. We’re going to be calling on them to be our future taxpayers. It’s in our national interest to protect them.”