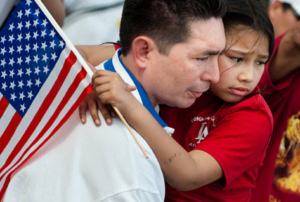 Lora Livingston, a district judge who handles civil and family court cases in Travis County, Texas, was in her chambers on a Friday last spring when a court staffer called her to tell her that an Immigration and Customs Enforcement agent was in the building.

After some confusion, the agent realized he had mistakenly gone looking for an undocumented immigrant in the civil family courthouse instead of the criminal court, which is located about 100 yards away. But by the time the family courts had resumed for the afternoon, the word about the agent’s presence had spread. No one showed up for court.

“Our Child Protective Services docket just crumbled,” Livingston said. “He wasn’t even looking for anyone in this building but his mere presence created an atmosphere of anxiety and fear and that led to the docket falling apart.”

With the Trump administration continuing to crackdown on immigrants across the country, a new survey of judges, prosecutors, law enforcement and advocates suggests immigrant victims are less willing to report crimes or go to court because they fear they’ll be deported.

More than 750 people participated in the survey from the National Immigrant Women’s Advocacy Project. It is the first to simultaneously seek out the perspectives of judges, police, prosecutors, victim advocates and attorneys, on questions related to their interactions with immigrant crime victims.

For example, the survey found that:

About one-third of the 108 judges surveyed said that the opposing party in a criminal, protection order or custody case was using a victim’s lack of immigration status against them more often in 2017 compared with 2016.

About 40 percent of the 50 prosecutors who participated in the study said that in sexual assault and domestic violence cases, immigrant victims were less likely to work with prosecutors in 2017 than in previous years.

About 40 percent of the 232 law enforcement officials who responded to the survey said they believe that federal immigration policies have affected their relationships with immigrant communities in 2017 compared with 2016.