Home Economics How Immigration Reform Could Lower Your Grocery Bill 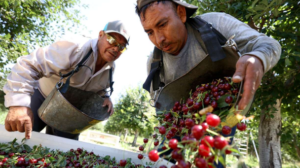 SALT LAKE CITY — Eggs, fruit, bacon, milk — all are more expensive now than they were a year ago, according to the Bureau of Labor Statistics. Ground coffee prices increased nearly 15% in the past year, while citrus shot up 18%.

A number of factors play into the rising prices. The war in Ukraine, a country dubbed the breadbasket of Europe, has resulted in global food shortages, while bad weather in the U.S. is hurting crop yields. Current inflation also means goods are going up across the board.

And while there is no silver bullet, experts say fixing America’s outdated agricultural labor system, where the last reforms came under President Ronald Reagan decades ago, will provide immediate relief to both farmers and consumers, alleviating the nationwide worker shortage that has caused grocery prices to skyrocket.

Congress’ answer is the Farm Workforce Modernization Act, the framework for which has already passed the House. While many immigration and agriculture advocates support the bill, it has some critics in Utah who want to see more comprehensive reforms.

“Congress hasn’t dealt with agricultural immigration reform for close to 35 years,” said Ron Gibson, a dairy and produce farmer, and president of the Utah Farm Bureau. “We might not get another crack at this for 35 more years.”

The COVID-19 pandemic upended the U.S. labor market, making it harder for all employers to retain talent, farmers included.

“We’ve seen how disruptions to the supply chain and a shortage of reliable workers has catastrophic impacts on businesses and on entire industries. We’ve gotten a glimpse of what food shortages look like,” said Joel Anderson, executive director of the Snake River Farmers Association in Idaho. “We have seen bare shelves in our grocery stores.”

On Wednesday, Anderson joined stakeholders in the agriculture industry from around the country to discuss immigration reform, urging the U.S. Senate to pass the Farm Workforce Modernization Act, which among other things, would create a new temporary worker visa program.