Home Congress & Federal Laws How Have Attitudes Toward US Immigration Changed? 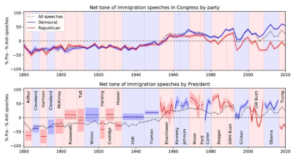 Hostility to immigrants isn’t new to the United States. In 1896, Henry Cabot Lodge warned on the Senate floor that the “mental and moral qualities” of Americans would be endangered by the “wholesale infusion of races whose traditions … are wholly alien to ours.” In recent years, former President Donald Trump demonized Mexican immigrants as rapists and drug dealers and suspended immigration from several countries with predominantly Muslim populations.

Are either of these speakers representative of the broader opinion of their times?

A new study that uses artificial intelligence to chart the tone of more than 200,000 congressional and presidential speeches on immigration since 1880 provides a surprising historical perspective.

The study, just published in Proceedings of the National Academy of Sciences, finds that the overall trend of political speeches quickly became more sympathetic following World War II and has remained favorable, on average, until today.

At the same time, however, attitudes have become increasingly polarized along party lines. Democratic rhetoric has been reliably sympathetic toward immigrants since the 1960s, and especially pro-immigration in the past decade, while that of Republicans has become increasingly hostile since the 1990s, and more likely to characterize immigrants with subtle de-humanizing language.

“The overall trend in speeches toward immigrants before the 1920s was negative, but it shifted to mostly positive within a single generation—from 1945 to 1965,” says Ran Abramitzky, a professor of economics and an economic historian at Stanford who teamed up with AI researchers on the new paper. “One thing we find especially striking is that positive sentiment continued in recent decades, even after the border reopened in 1965 and as the flow of immigrants from Central America and Asia has replaced migration from Europe.”

All told, the team assessed 8 million speeches, and then drilled down on more than 200,000 that were relevant to immigration. Using natural language processing, the researchers then identified whether each speech was positive, negative, or neutral.