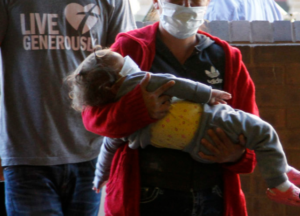 After fleeing Cuba and crossing into the United States last year, Arlet Victoria Remón Pérez has spent more than nine months in a U.S. Immigration and Customs Enforcement detention center in Jena, Louisiana. In that time, she’s become familiar with the quality of health care the government provides inside the privately operated jail.

Remón’s mother, Arleen Aileen Pérez Vila, said her daughter spent a month asking for medical attention in the 1,200-bed LaSalle ICE Processing Center because she’d gone months without her period. Only recently was Remón taken to a hospital outside the detention center, where she was diagnosed with ovarian cysts.

Now, Pérez said, her daughter is terrified by the prospect of relying on that medical system if the new coronavirus reaches the facility where she’s being held. Remón has severe asthma, which puts her at high risk for complications from the virus. Having studied medicine in Cuba, Remón has told her mother that the facility is not equipped for an outbreak.

The danger Remón faced in Cuba as a queer-identifying woman in a family of well-known dissidents made fleeing for America seem like an obvious choice a year ago. But the risk she’s facing now in detention is something she and her family had never imagined: a deadly pandemic.

In chat groups with parents of other detainees, Pérez, who is still in Cuba, can only vent her fears and share her hope that her daughter survives. “The thought that she was coming to the land of freedom and liberty only to find that it’s in the grip of a monster has been difficult to reconcile,” she said.

In a statement on its website, ICE says it began rolling out its “pandemic workforce protection plan” in January and has medical isolation rooms for people who develop a fever or cough. At-risk detainees, the agency says, “are housed separately in a single cell, or as a group, depending on available space.”

Bryan Cox, an ICE spokesperson, said the agency can’t comment on an individual’s case without the person’s written consent.