Home Politics How Did the Women in Arizona Adoption Scam Get Government Health Care? 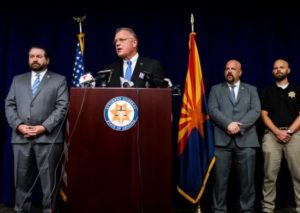 The adoption scandal involving Maricopa County Assessor Paul Petersen raises serious questions about how the pregnant women he brought to Arizona were able to get government health care.

That’s because people from the Marshall Islands, where the women were from, do not qualify for Medicaid in Arizona unless they are U.S. citizens or lawful, permanent U.S. residents of at least five years. There are a few exceptions, including refugees and asylees.

Petersen and his co-defendant Lynwood Jennet are accused of stealing from Arizona’s Medicaid program and of forging documents to help pregnant women from the Marshall Islands enroll in state health insurance for low-income people. Anyone who enrolls in Medicaid in Arizona must also provide proof they are a state resident.

For women who do qualify, the Arizona Health Care Cost Containment System, which is Arizona’s Medicaid program, will pay for the medical care of pregnant women who earn up to 156% of the federal poverty level. That works out to up to $19,488 per year for one mother-to-be.

According to court documents, investigators have identified 29 births associated in an adoption scandal that they say swindled Arizona’s Medicaid program out of more than $800,000.

The births, court documents say, were all to women from the Republic of the Marshall Islands arranged by Petersen. Investigators say the women lived in Arizona long enough to have the babies here and put them up for adoption through Petersen.

Some applications for AHCCCS can be approved in real-time if no additional verification information is needed, agency spokeswman Heidi Capriotti wrote in an email. For pregnant women found eligible for AHCCCS, eligibility begins the first day of the month in which the application was submitted, she said.

Twenty-eight women from the Marshall Islands gave birth to 29 babies in the Phoenix area between Nov. 30, 2015, and May 30 and subsequently gave their babies up for adoption through Petersen, a probable cause statement filed in Maricopa County Superior Court says.

The Marshall Islands have an international treaty with the U.S. that is known as a “compact of free association,” which means they are allowed to live and work in the U.S., though they are not U.S. citizens.