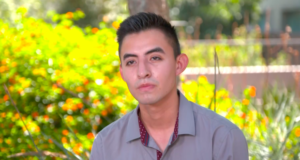 Gilberto was 13 when he saw his life slipping away.

A group of gang members in Guatemala had cornered Gilberto in an alley and held a gun to his stomach. The only reason they didn’t kill him was because there were witnesses nearby, Gilberto told CBS News.

“The gangs there were threatening me because I was a religious person, and they wanted me to sell drugs in school, and I didn’t want to do it,” said Gilberto, now 20.

A devout evangelical Christian, Gilberto said he spent much of his time outside school hours participating in church programs designed to provide young people in his working-class community a spiritual alternative to gang violence. There’s a video showing 11-year-old Gilberto participating in a reenactment of “Little Red Riding Hood,” portraying a wolf who epitomized the dangers of gang life.

Gilberto’s church activities placed him in the crosshairs of MS-13 gang members at a young age. It started when he was hit with rocks and beaten up at school, but the persecution escalated as Gilberto grew older and refused to give in to the gang members’ demands, which included selling dulces, or sweets, a codename for illicit drugs.

That fateful encounter in the alley was the final straw for Gilberto and his father, who had been living in the U.S. since 2005.

In May 2014, Gilberto fled his home in the outskirts of Guatemala City, hoping to find safety on U.S. soil.

“I was forced to come to the United States because if I would’ve stayed in Guatemala, I would’ve been killed there,” Gilberto said.

Hundreds of thousands of unaccompanied migrant children have reached the U.S. southern border in the past decade, and both Republican and Democratic administrations have struggled to process the minors, who have special protections under U.S. law.

Between October 2012 and March 2020, U.S. officials at the southern border encountered 494,000 unaccompanied migrant children, according to a CBS News analysis of government data.