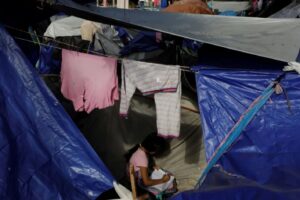 Every day feels like a bad dream to Timoty Correas. He spent five months in a jam-packed tent camp before moving weeks ago to a roach-infested hotel full of migrant families in a neighborhood, blocks from the US border where, he said, during the night local crime cartels would load crowds of smuggled people in and out of houses used as hiding places.

Like thousands of other people here, Correas and his eight-year-old son are stranded at the US border, always hoping that hardline pandemic-related restrictions will cease and the processing of asylum seekers by the US will resume.

Correas, a vegetable seller, fled Honduras to try to find his parents in Houston, Texas, after gang members took over his house with death threats in May. He planned to seek asylum in the US.

A cross marks a handmade memorial on the banks of the Rio Grande, where many migrants have lost their lives while trying to cross, in Matamoros, Tamaulipas state, Mexico, Thursday, June 27, 2019. Hundreds of migrants from Central America, South America, the Caribbean and Africa have been waiting for their number to be called at the bridge in downtown Matamoros, to have the opportunity to request asylum in the U.S. (AP Photo/Rebecca Blackwell)
‘People with no names’: the drowned migrants buried in pauper’s graves
Read more
Correas traveled a month with smugglers through Mexico alongside a tide of other northbound migrants and reached Reynosa, across from Hidalgo, Texas, towards the eastern end of the US-Mexico border, in June.

But he and his son found the border essentially closed to asylum seekers.

Then, when he recently heard on TV news that the US would begin processing asylum cases through a reboot of former president Donald Trump’s controversial Remain in Mexico program, known as Migrant Protection Protocols (MPP), he was hopeful.

By Dylan Baddour for THE GUARDIAN
Read Full Article HERE