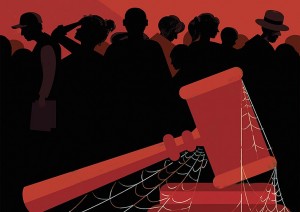 Inside Yam’s court, there’s a good chance she’ll give everybody the boot. “She has cleared her courtroom if somebody’s outfit hadn’t been dry-cleaned in between hearings,” says a Houston-based immigration lawyer. Even though Houston’s understaffed immigration courts are buried under a crippling backlog, Yam often resets the hearings of asylum seekers because of her so-called debilitating allergies.

Before arriving in Houston in 2004, Yam presided at San Francisco Immigration Court for nearly a decade. “Nobody here wanted to do a hearing…if Mimi Schooley Yam was the judge,” says a San Francisco-based immigration lawyer. Like many law practitioners contacted by the Houston Press, the attorney asked not to be identified because the attorney still practices immigration law.“She doesn’t have the right temperament or the skill set.”

Three years ago, when Yam actually ruled on immigration cases in Houston, Maria Esparza Olvera’s life was in the hands of the controversial, erratic judge.

Born in central Mexico, Olvera, whose father belonged to a prominent political party, had become a doomed target of Los Zetas, which the U.S. government calls “the most technologically advanced, sophisticated, powerful, ruthlessly violent and dangerous cartel operating in Mexico.” Olvera’s lawyer and a friend say that Los Zetas chained Olvera naked to a pole, forced her to ingest drugs and ransomed money from her husband, a Houston business owner, in exchange for Olvera’s life.

Olvera managed to escape the clutches of the brutal criminal syndicate and procure a hearing with Houston immigration judge Jimmie Benton. But Benton retired in 2013, and Yam took over Olvera’s case.