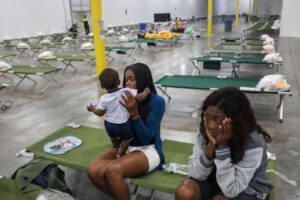 Asylum seekers pleading their immigration cases in Houston are among the least likely to win their cases to lawfully remain in the United States, according to a new report looking at 62 immigration courts across the country.

Despite Houston’s reputation for being a “welcoming city,” immigration judges there denied between 89 and 100 percent of cases from fiscal years 2016 to 2021, according to a Syracuse University analysis of over 223,469 asylum decisions nationwide.

“Once you’re in Houston, you’re kind of done,” said Syracuse University researcher Austin Kocher. “Basically all of the judges deny 90 percent or more of their cases.”

Houston immigration attorney Ruby Powers said it can be very draining to take on an asylum case, which take many hours and intimate discussions with clients, all while knowing there’s a good chance it will be denied. Some attorneys even decide not to take asylum cases.

“I have a legal assistant who came to me from another firm and they’re like ‘I didn’t know you could win asylum’ because they’ve never seen it before,” she said.

The Syracuse University report also analyzed denial rates in smaller courts in the Houston area, such as the Houston – Gessner court and the Conroe court, which saw judges deny up to 96 percent and 98 percent of asylum cases, respectively.

In comparison to Houston’s consistently high denial rates, New York judges denied between 5 and 95 percent of cases, according to the data analysis of federal court records, meaning asylum seekers in New York have a much higher chance of winning their case.

Houston immigration attorney Leslie Giron Kirby takes this into consideration when she meets asylum seekers who may not be planning to stay in Houston.

“Their final destination may be L.A. or New York or some other venues that may have a higher rate of approval,” she said.