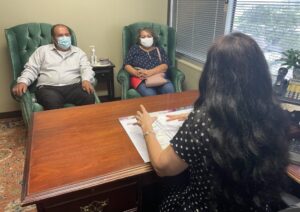 Immigration judges in Houston and other Texas cities are hearing cases again after they were on pause for more than a year due to the pandemic. As courts reopen, judges face a national immigration court backlog that has ballooned to 1.3 million cases, which has led to wait times that can span a decade.

Claudia and Francisco Méndez have been waiting to plead their immigration case for nearly 10 years.

The outcome of their case could separate them from their 12-year-old daughter, a United States citizen born with a birth defect called spina bifida.

When the Méndez family came to the U.S. from Mexico 20 years ago, they overstayed their visa and built a life in Houston, like hundreds of thousands do, without authorization. Then their youngest daughter Emily was born, and they realized they had to fight for legal immigration status to protect her.

“She has to have special treatment and care,” said Francisco Méndez, who explained that Emily uses a wheelchair, has undergone several surgeries and will always depend on a caretaker.

Claudia Méndez, who stays home to care for her, said as Emily gets older, “she’s going to grow mentally very little and physically, she’ll always require the attention equal to a small child.”

They couldn’t risk deportation, so they went to immigration attorney Elizabeth Mendoza to start their case within Houston’s immigration courts.

Their case has been delayed several times, including during the pandemic, which has taken an emotional toll on the family.

“(I feel) a lot of stress,” said Claudia Méndez. “We need to have legal status, more than anything, to be sure we won’t be separated from our daughter.”

The Méndez family is one of thousands in Houston waiting years for their day in court, which has been further delayed by the pandemic.