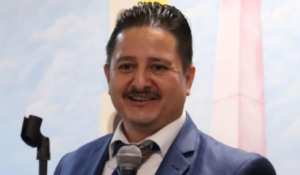 HOUSTON – A judge denied bond Monday for Roland Gramajo, a community activist who was arrested by immigration agents weeks after hosting a forum to quell concerns about immigration raids.

The 40-year-old father of five, an undocumented Guatemalan immigrant who has been living in the US for 25 years, has been an outspoken activist for immigrants in Houston, Texas, the place he calls home.

He was arrested by Immigration and Customs Enforcement agents earlier this month, ICE said.

The agency says the arrest was part of a routine operation based on an anonymous tip to remove Gramajo, who had re-entered the US illegally in 2004.

Family and friends say they believe Gramajo’s activism made him a target of ICE, as the Trump administration pursues a hardline agenda on immigration. Weeks before his arrest, Gramajo had invited ICE to a forum he hosted to help ease fears about ICE raids, but the agency declined, the activist and his lawyer said.

“We want to believe these are coincidences, unfortunately the more and more we see them, the more we feel that some people who are speaking out against the administration or ICE are being targeted by those same agencies,” said Cesar Espinosa with FIEL Houston, an immigrant rights organization.

Gramajo is being held by US Marshals because the federal government wants to convict him for illegal reentry, something that could result in prison time before he is deported.

The judge’s decision to deny bond clears the way for the government to prosecute him for the illegal reentry charge.

The judge said if Gramajo was released to ICE, he could be deported before that case could be tried.

Gramajo was convicted of burglary of a vehicle — a misdemeanor — in 1999 when he was 19 years old, according to court documents read by a judge Monday. Because he was in the US illegally, he faced deportation.

Gramajo’s appeal of the ruling was denied in 2001.