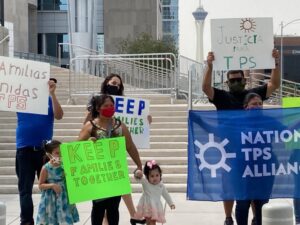 A provision tucked in the $3.5 trillion reconciliation package would direct Congress to chart a path for citizenship for millions of undocumented people.

If passed, the House provision would provide a pathway to citizenship for those in the Deferred Action for Childhood Arrivals program, often referred to as Dreamers; farmworker workers; those who hold a Temporary Protected Status, meaning they are unable to return to their countries; and essential workers.

The Senate’s version also supports a pathway to citizenship for undocumented people, but doesn’t specify which groups would qualify.

Erika Castro, the organizing director of the Progressive Leadership Alliance of Nevada, said in a statement Monday, that immigrant workers are a “core piece of our economy” and have been waiting more than 30 years for meaningful legislation to be passed by Congress.

“Immigrant workers are essential and it’s time our country values their work, sacrifices and contributions by providing a path to citizenship and protection from deportation,” Castro said. “We cannot continue to simultaneously treat essential workers as both essential and deportable because immigrant essential workers have more than earned a path to citizenship after aiding in the pandemic recovery, and have proven that they are key to our nation’s infrastructure and well being.”

There are more than 11 million undocumented people in the U.S., according to the Migration Policy Institute, a nonpartisan think tank that studies migration. An estimated 162,000 live in Nevada.

If passed, the provision could affect dozens of states with high immigrant populations such as Florida, California, Texas, Georgia, New Jersey, Virginia, Maryland and Pennsylvania, according to the Migration Policy Institute.

“Aside from being the moral thing to do, providing a pathway to lawful permanent resident (LPR) status for Dreamers, recipients of Temporary Protected Status (TPS), farmworkers, and essential workers will be a boon for our economy,” according to the House’s 2022 budget resolution, which provides reconciliation instructions to all committees.