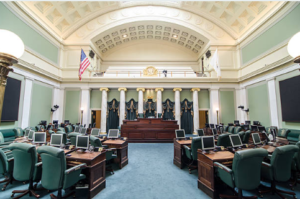 STATE HOUSE — A group of state representatives has asked overdue state budget negotiators to adopt Senate language restricting local authorities from cooperating with federal immigration enforcement, advocating for a measure Speaker Robert DeLeo has said would be “very difficult” to pass in the House.

The House Progressive Caucus wrote to the conference committee negotiating the state budget, tapping the Senate’s immigration amendment as among its members’ priorities. The caucus’s exact request and the reasoning behind it are unclear, however.

An aide to Majority Whip Byron Rushing, who co-chairs the caucus with Rep. Tricia Farley-Bouvier, said the caucus “won’t be releasing an internal letter” and pointed to a June 25 tweet on the topic as the “only public statement.”

The Progressive Caucus’s other budget priorities include lifting a cap on family welfare benefits and increased funding for early education, the Department of Ecological Restoration, Massachusetts Legal Aid Corporation, and the YouthWorks employment program.

“The caucus wrote the conference committee on those items and the 4 immigration protections included in the Senate budget, because the Safe Communities Act is a caucus legislative priority. Members had gotten a lot of interest from constituents about whether they had advocated for that piece, so they wanted to confirm that publicly,” Caroline Sherrard, Rushing’s legislative director, said in an email.

The Senate amendment, which Gov. Charlie Baker has threatened to veto, would prohibit local law enforcement from entering collaboration agreements with Immigration and Customs Enforcement and generally prevent police from inquiring into people’s immigration status.

By Katie Lannan for THE ENTERPRISE
Read Full Article HERE