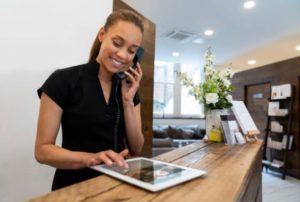 (DETROIT) — There’s a new target in the clash over immigration: hotels.

Advocacy groups and unions are pressuring Marriott, MGM and others not to house migrants who have been arrested by Immigration and Customs Enforcement officers. The U.S. government has occasionally detained migrants in hotels for decades and says it might have to split up families if hotels don’t help.

It’s the latest example of a private industry caught in the political fray of an overtaxed immigration system.

Hotels don’t like to wade into politics. They’re used to accepting business without questions and tuning their lobby televisions to nonpolitical channels. They’re also used to working with the government, whether to host displaced flood victims, defense contractors or conferences.

But when the Trump administration announced immigration arrests targeting families the weekend of July 13 and said it might use hotels, the big companies responded. Marriott, Hilton, Choice Hotels, Best Western, Wyndham, Hyatt, IHG and MGM Resorts all released statements saying they don’t want their hotels used to detain migrants.

Hotels felt pressure from their unions — which represent thousands of immigrants — as well as from customers angered by recent scenes of overcrowding and other squalid conditions at detention facilities.

“Hotels are meant to welcome people from all over the world, not jail them,” said D. Taylor, president of the hotel workers union Unite Here.

The companies also needed to reassure customers that their properties are safe and not overrun by armed guards watching migrants, said Daniel Mount, an associate professor of hospitality management at Pennsylvania State University.