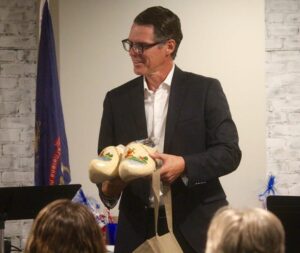 HOLLAND — Immigration reform in the U.S. is a hotly contested topic, one that often leads to polarization within the two major political parties.

The LIBRE Initiative is a nonprofit organization that aims to promote “small government” immigration solutions to benefit Latino immigrants. The group hosted an event in Holland, Tuesday, June 15, discussing how Americans and Latin Americans interested in immigration reform can push their elected officials for compromise.

Daniel Garza, president and founder of LIBRE, spoke to a small group at Beechwood Grill in Holland about his support for the Bipartisan Border Solutions Act of 2021 — legislation backed by Reps. Henry Cuellar, D-Texas, and Tony Gonzalez, R-Texas, in the House and Sens. John Cornyn, R-Texas, and Krysten Sinema, D-Arizona, in the Senate.

The Act would bolster the amount of judges, case workers and enforcement staff at the border, while also creating four new permanent processing centers to address surges in migrants attempting to enter the U.S. at its southern border with Mexico. Both versions of the bills remain in their respective committees in each chamber.

Garza, a Republican who worked in the administration of former President George W. Bush, said by advancing common ground reforms, the U.S. can achieve progress toward re the current immigration system.

“Two extreme positions on immigration reform are untenable,” Garza said. “We need to advance to a position where bipartisan reform can happen.

“… (Extreme positions) only represent a small portion of Americans. The majority of Americans support a common ground solution.”

Garza said opening legal channels for those in Latin America looking to emigrate to the U.S. would create opportunities for immigrants to prosper in America. He noted migrant workers, like many in his family before they fully settled in the U.S. Garza said it’s these types of people who work hard and contribute to the American economy, often creating opportunities for future generations of family members.