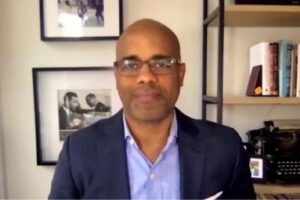 Harris Communications Director Jamal Simmons on Thursday met via teleconference with Congressional Hispanic Caucus (CHC) members to address the tweets, which re-surfaced shortly after his position was announced earlier this month.

“Jamal was apologetic and seemed open during the meeting. He said that he was ready and willing to work with the CHC,” said a source familiar with the conversation, which took place at the CHC’s weekly members meeting.

Still, Simmons received pushback in the meeting, particularly from the group’s most senior senator, New Jersey’s Bob Menéndez, who led the push in the upper chamber to include immigration provisions in President Biden’s signature Build Back Better (BBB) spending legislation.

According to another source in the room, “Menendez emphasized how his actions are more important than words from now on, and reminded Simmons to be thoughtful before saying anything that can hurt an entire community.”

Simmons’ presentation to the CHC was preceded by a blitz on social media and direct calls to lawmakers, with powerful allies in the immigrant community vouching for the Harris aide.

Simmons, who previously worked at progressive public affairs firm The Raben Group and as a progressive political commentator including at Hill.TV, has a history of taking left-leaning positions on an array of issues, including immigration, before and since the tweets in question.

Still, some members of the CHC and many in the Hispanic community found it hard to forgive one tweet, where Simmons made a flippant remark questioning immigration arrests.

Rep. Lou Correa (D-Calif.), who decided not to attend the meeting because of the nature of that remark, said Simmons’ “acid test is going to be the test of time.”