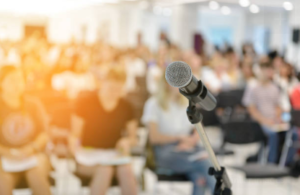 The town hall was Hill’s fourth in a span of six months, according to Kassie King, Hill’s communications director, and for the roughly two-hour Sunday session, she read from a prepared statement as well as freestyled answers asked by constituents and attendees — which included residents of Santa Clarita and Simi Valley.

After the attendees were seated promptly around 3:30 p.m. — filling most of the seats in the spacious auditorium — Hill didn’t waste any time describing the political climate in Washington.

“There’s a ton of partisanship going on in Washington; you all know that,” Hill said. “There’s a lot of gridlock, there’s too much money and too much power in the hands of a very few people who do not reflect all of us. But I would always listen to you and I’ll always be straight with you, and that’s why I’m here today.”

As soon as she finished her intro remarks, Hill instructed the attendees to line up in the aisle and identify themselves, then speak up to two minutes. She took five questions at a time and then addressed each question.

The first question asked about which House of Representatives committees Hill sits on, which she then listed: Oversight and Reform (vice chair), House Armed Services, and Science, Space and Technology.

The next question was on the issue of the Antelope Valley’s homeless population — to which Hill quickly pointed at her policy position and potential solutions.

“The immediate solution that needs to happen really has to focus on how we’re creating that housing stock,” she said. “How we are making sure that we are building affordable housing or that we are dedicating affordable housing. We want to have mixed housing — that’s great — but, we need to have a dedicated amount of units that are specifically for people who cannot afford any kind of market rate housing no matter how much we build.”