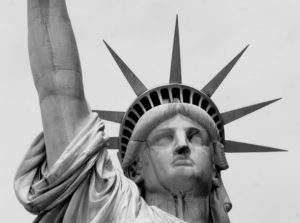 In debates, on the campaign trail, and in conservative media outlets, opponents of progressive immigration policies frequently describe immigrants in the most negative possible light—as rapists, murderers, and gang members. Their aim is often to trigger panic about the perceived threat immigrants pose to the American public. They oppose policies such as pathways to citizenship for undocumented immigrants and call for an end to so-called “chain migration,” a term appropriated from academia to stoke fears of an endless stream of immigrants overrunning the country, stealing jobs and opportunities from citizens. This rhetoric also plays on many Americans’ fear of terrorism, seeking to incite support for increased deportations and heightened border security, such as President Trump’s proposed wall between the United States and Mexico. Opponents persist despite ample evidence of immigrants’ contributions to the US economy and society, and the economic benefits of proposed progressive legislation.

Language that defines immigrants as “others” frequently dominates public discourse around immigration and immigrants. It casts immigrants outside of the American “tribe” and creates the impression that they are unworthy of public support. It also conflates lawfully present immigrants with those who are undocumented, effectively painting all immigrants with a broad brushstroke of illegality.

In fact, framing immigrants as “others” has infiltrated the US national dialogue and seeped into the country’s collective consciousness, so much so that even progressive politicians often use it without realizing its toxic effects. When Bernie Sanders urged undocumented immigrants to come “out of the shadows” during the 2016 primary campaign, for example, he unknowingly evoked metaphorical language that equates immigrants with dark, hidden places where criminals might reside.