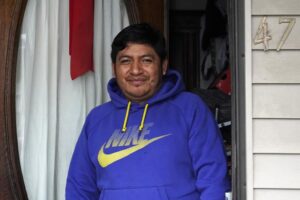 BOSTON (AP) — Just a few short months ago, Lucio Perez moved out of the western Massachusetts church he’d lived in for more than three years to avoid deportation.

Immigration authorities in March granted the 40-year-old Guatemalan national a temporary stay in his deportation while he argued to have his immigration case reconsidered.

Now, Perez is looking to a recent Supreme Court ruling to help him clear that final hurdle and officially be allowed to remain in the country he’s called home for more than two decades.

“At this point, I’m feeling very positive that everything is on the right track,” he said recently from his home in Springfield, Massachusetts. “I don’t have that fear of deportation anymore. I feel safer now.”

Perez is among scores of immigrants hoping to get their deportation cancelled because they didn’t receive proper notice of the court proceedings.

In April, the Supreme Court ruled in Niz-Chavez vs. Garland that the federal government must provide all required information to immigrants facing deportation in a single notice.

The U.S. Immigration and Customs Enforcement for years has been notifying immigrations about their deportation cases in roughly two parts: an initial notice to appear in court and follow up notices providing the date, time and location of the proceedings.

But Justice Neil Gorsuch, in his majority opinion, criticized the piecemeal approach as exceeding federal law.

The issue, he argued, hinged on the shortest of words: a 1996 immigration law calls for the government to issue “a” notice to appear, implying Congress intended those facing deportation to receive a single document.

“At one level, today’s dispute may seem semantic, focused on a single word, a small one at that,” said Gorsuch, a conservative judge appointed by former Republican President Donald Trump. “But words are how the law constrains power.”

Immigration lawyers and advocates, who have long complained about the deportation notification process, say the ruling has implications for scores of immigration cases.