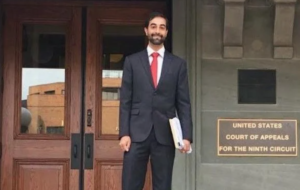 Shahid Haque has dedicated his career to bettering the lives of people coming into the United States. His most recent endeavor, the app Open Borders, acts as a TurboTax-style immigration guide.

After conducting thousands of immigration consultations, Haque said, he developed a system for evaluating cases and identifying the important factors that affect a client’s options.

“I wanted to use my knowledge of immigration law to benefit people around the world, so I spent several years writing a guide that offers a free, automated assessment of your immigration options,” he said.

Since launching on Nov. 3, the app had eight ratings of five out of five stars as of Monday. It is currently available on iPhones, iPads, Macs and the web

Haque is the president of Border Crossing Law Firm based in Helena. He was drawn to immigration law because his parents immigrated from Pakistan to America around 50 years ago.

“I always had an interest in immigration because my parents were immigrants, and that kind of gave me a greater appreciation for what immigrants go through when they come here to the United States,” stated Haque. “… Another part of it was when I was in law school, I started working with a group that was helping asylum seekers come into the United States.”

Haque attended Chicago-Kent College of Law. After graduating, he worked with a large firm, but continued his pro bono work with asylum seekers. He eventually transitioned full time into immigration law.

When Haque moved to Montana, he established Border Crossing Law Firm in 2008. He also has worked as a law professor and has 17 years of experience as an immigration attorney. He’s represented thousands of clients in navigating the complex U.S. immigration system.

Haque has worked pro bono for the six Afghan refugee families since the first refugees arrived in January in Helena, said Valerie Hellermann, executive director of Hands on Global, a nonprofit that works closely with the Afghan families.