Home Court News He Spat on a Man From Ukraine. Now He Has to Write About the Immigrant Experience. 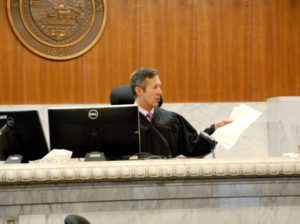 When the manager of a car dealership, a Ukrainian immigrant, asked a 37-year-old man to clean up his trash, the man spit in the manager’s face, told him to go back to his own country and threatened to cut him with a box cutter.

Now that man, Harold Eugene Denson III, of Portland, Ore., will have to reflect on what his actions might have meant to the manager — if he wants to avoid more punishment, that is.

As part of Mr. Denson’s sentence after pleading no contest to a bias crime and unlawful use of a weapon, Judge Christopher A. Ramras of Multnomah County Circuit Court ordered on Friday that he write a 500-word essay on the hardships of immigration.

“I’m not asking you to focus on any one particular country,” Judge Ramras told Mr. Denson during the sentencing. “What I am asking you to do is to put yourself into their shoes and position and write a report that explains some of the challenges of what it might be like for them coming to this country.”

There are about 50,000 immigrants from the part of the world where the manager comes from living in the Portland metropolitan area, Judge Ramras noted during the hearing.

Mr. Denson, who has been homeless for a year, according to his lawyer, Autumn Shreve, has until March to submit the essay. If the court accepts it, he can withdraw his plea and the bias crime charge will be dropped. If not, Mr. Denson will be convicted and could face more penalties, according to a news release from the Multnomah County District Attorney’s Office.

Mr. Denson pleaded no contest to the bias crime charge and to one count of unlawful use of a weapon on Friday. Mr. Denson, who has been in jail since August, was sentenced on the weapon charge to the 90 days he had already served. He was released on Monday, according to Ms. Shreve.